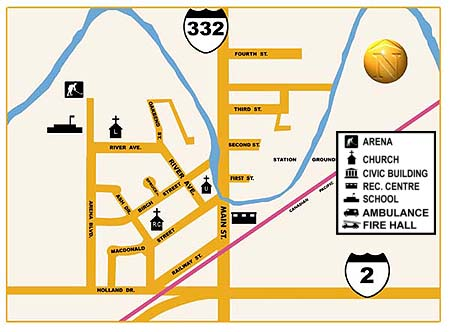 Firmly anchored to agriculture in the heart of wheat-growing country. Settlement in the Starbuck area began in the 1870s, but Starbuck did not become a place on the map until the Manitoba and South Western Colonization Railway came through in 1881.

Vanderstice, the contractor who graded the roadbed, named the station after Starbuck, a village in Minnesota. The Canadian Pacific took control of the railway in 1884 and completed construction. The line became known as the Souris branch of the CPR.

The earliest settlers came from the east, some in family groups. Between 1897 and 1909 numerous families immigrated from the United States, some taking homesteads and others setting up businesses in the village.

By 1909, Starbuck had developed into a thriving community with elevators capable of storing 50,000 bushels and passenger train service as often as twice a day on weekdays. The Starbuck Board of Trade prepared a pamphlet extolling the community, stating "the village boasts of two general stores which would be a credit to any town of greater pretensions, all major trades are represented- blacksmith, lumber, butcher livery, hotel, bank, etc. and it is seldom indeed that a person cannot supply his needs, whatever they may be, locally".

Prospective farmers learned from the pamphlet that "the average rainfall is 14 and-a-half-inches; always enough to ensure good crops, and drought is practically unknown. There is more sunlight in Canada than any other wheat growing country in the world. The land is prairie and is practically free from stones and brush; the soil is the very best alluvial black loam. . It is just rolling enough to ensure good drainage, and along most streams will be found timber in abundance."

In the early days the town's Public Lane was a narrow street with seven houses on the south side. When the municipality began building wooden sidewalks, these Public Lane residents put in their request. Since the lane was too narrow, the homeowners agreed to give the municipality enough frontage to accommodate a sidewalk and a wider street.

One of the largest influxes of immigrants stepped off the train in September 1929. The Ammeter clan of about 30 men, women and children marched from the station to what was then known as the old Meakin farm west of Starbuck on the La Salle River. At first the 10 families making up the clan all lived in the big house. Later some moved to another farmstead known as the Carlson farm.

Starbuck developed a distinct small town setting which has stood it in good stead up to the present. Today, Starbuck offers most of the amenities found in large urban centres.

Located 13 minutes west of the Perimeter along Highway #2, Starbuck is within good commuting distance from Winnipeg. The services provided by the RM of Macdonald include water and sewer, natural gas, fire protection and ambulance.

A recreation complex with artificial ice includes three sheets of ice for curling, a skating rink, and a visitors lounging area complete with a licensed bar and satellite TV. The Starbuck Recreation Center hosts many hockey and ringette tournaments, curling bonspiels, and has a figure skating club.

Other winter activities include cross-country ski trails and a snowmobile club with approved trails. In the summer months, there are tennis courts available, annual ball tournaments, and Bridges Golf Course (18-hole course). Kindergarten to Grade 8 are taught locally with Grades 9-12 bused to a regional collegiate in Sanford.

Three churches (Catholic, United, and Lutheran) are located within the town, and share in many of the community activities. With a population base of approximately 350, everyone knows you and is always willing to give a helping hand.